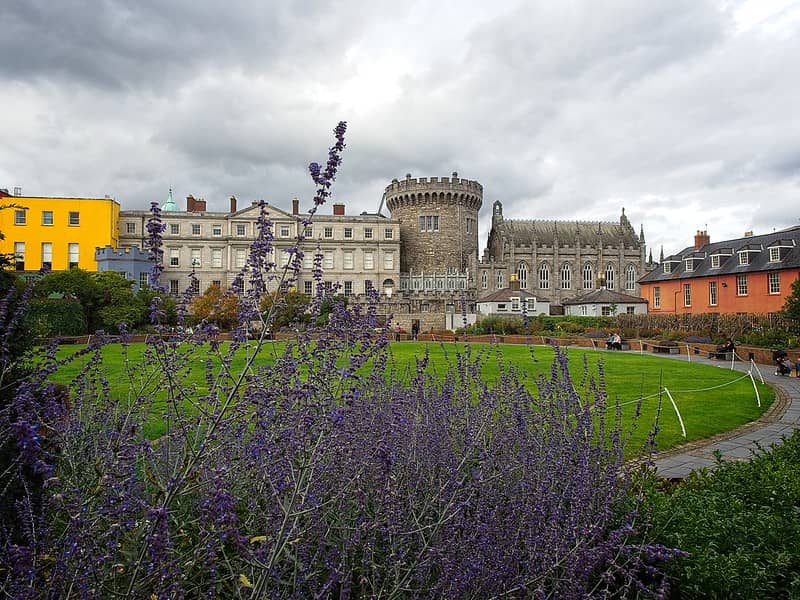 Nothing was of greater importance to the clans of Ireland than the records of their ancestry.

Until the final destruction of the clan system itself, every tribe jealously preserved the tradition of its descent from some famous ancestor. In early times these records were of vital importance: they were the title deeds of the clan to the territory it occupied; they formed the bond which united various clans into one great tribe; they justified the tributes that the different Kings imposed upon their subordinate clans.

The genealogies of the clans were,’ therefore, carefully recorded, especially in the cases of those ” riding clans ” who imposed tribute upon their neighbours and who afterwards supplied the Kings who ruled over the grand divisions of the island.

We have seen that those ” ruling clans ” claimed to be descended from the early leaders of the ” Milesians ”. This is a pure fable due to a boastful tribal spirit which, not content with an actual historical origin, traced back an ancestry through a line of unknown Kings to Heremon, Heber, Ir, or Ith—and even beyond them to Noah!

These spurious ancestors may be rejected. But, having discarded them, we still find the remaining cardinal facts in Irish History the great groups of families. We also find that of three of these groups, each has a common ancestor in three famous rival Kings.

Indeed, during historical times, the Kings and “ruling clans” of all the independent Kingdoms of Ireland (except Ulaidh) descended from one of three real personages— Cahit * Tara, Oirghialla, Aileach and Connacht. Mdr, Conn, and Mogh Nuath—who flourished about the middle of the 2nd century. In them, we find the origin of the chief dynasties of Ireland and of the families who, in later years, professed to trace their ancestry back to mythical times.

Soon after the reign of Tuathal, the rival Leinster family of (Jgaine found themselves in conflict with new enemies on their west. These were some southern tribes who crossed the Barrow and overran the plains on the east of that river.

The Leinstermen, with the aid of ” Irian ” and other auxiliaries, defeated the invaders. A large territory west of the Barrow was granted to their Northern allies, who occupied it as a military outpost and became known as the ” Seven Tribes of Laoighis (Leix).” Thus secured in the South, they renewed the contest with the Kings of Tara in their north.

Their King, Cahir M6r, was finally defeated and slain by Conn, the grandson of Tuathal. Still, he had firmly established the dynasty of Laighin, and his posterity reigned as the independent King of that territory. From Cahir, M6r have descended all the ” ruling clans ” of Leinster, from whom the Kings were chosen and who were free of tribute. All the other families of the Leinster branch of ” Heremonians ” trace their descent through him.

No sooner had Conn defeated his Leinster rival than the King of Tara found himself forced to defend Meath against the same power which had previously attacked Leinster. Having been foiled in one direction, the Southern tribes now moved in another and advanced along the south bank of the Shannon between that river and the Slieve Bloom Mountains.

Here under their King Mogh Nuath (Nuadhat), they came into conflict with the grandson and successor of Tuathal. The two antagonists at first agreed to divide the whole island between them, ” Leath Chuinn”, the northern half, going to Conn, and ” Leath Mhogha,” the southern half, to his rival. But within twelve months, Conn vanquished and slew his enemy in the battle of Magh Leana (near Tullamore).

The two-fold division quickly ended as a political factor. Still, the names remain in everyday use in Irish speech to the present day. His many victories won for Conn the title of ” Ce^-o C&tAt ” or ” of the Hundred Battles,”* but he fell at length fighting against Ulaidh. From Conn were derived the Kings and ” free clans ” of Meath and the Kingdoms to the north, northwest, and west, which were afterwards founded by his successors.

In other words, the second and more important branch of “Heremonians ” is descended from this opponent of Cahir Mr and Mogh North. The posterity of Conn—the famous ” Siol Chuinn “-form a group of kingly families that figure prominently throughout Irish History.

The third great dynasty, destined in future years to contest supremacy with the preceding two, was founded in Munster during the same period. Mogh Nuath (also called Eoghan Mdr), the rival of Conn, first laid the foundations of this Kingdom.

With the help of some forces from Leinster, he succeeded, not without difficulty, in bringing the tribes of the South under his control. It was his son Oilioll Olim, however, who completed the conquest and became the first undisputed King of Munster.

At first, from the stronghold, he established at Bruree and afterwards, from the more famous Rock of Cashel, the descendants of Oilioll Olim ruled over the tribes of the South. From his two sons—Cormac Cas and Eoghan (Owen), sprang the two great families from which alone were chosen the Kings of Munster—the Dal Chais or Dalcassians of Thomond or North Munster, and the Eoghanachta or Eugenians of South Munster or Desmond.

The ancestry of the ” Irian ” or ” Red Branch ” Kings—the Clanna Rury—who, from their ancient seat in Samhain Macha, ruled over the tribes of Ulaidh, is more remote and less authentic than that of the preceding three dynasties.

They claimed descent from Connal Cearnach, one of the great heroes of the war with Maeve. To Fergus, the Red Branch chief who seceded from Connor Mac Nessa and allied himself with Queen Maeve, many other ” Irian” tribes, which are found scattered as subordinate clans throughout the other kingdoms, trace their origin.

This northern dynasty, whose legends in many other ways suggest a source different from that of the other independent tribes, is the only one whose ancestry goes back to a period earlier than the second century.

A small group of families, most of whom were settled in a limited district in the southwest called Corkalee, represent the alleged descendants of the unlucky Lih. They, too, all unite in a single personage called Lughaidh (Lewy) Mac Con, who is said to have led an unsuccessful revolt of the non-Heberian tribes of Munster against Oiholl Olim, and also to have defeated Art, the son of Conn of Meath, in the battle of Magh Macruimhe near Athenry. However, the” Italian ” families were of slight historical importance, as they were utterly dominated by the posterity of Oilioll Olim.

Hence we find in the second century the origin of the three great dynasties, which supplied the independent rulers of all parts of Ireland (except Ulaidh) for hundreds of years, and which con­tested with each other the supremacy of the country.

Here, too, we have the clues to the alliances and rivalries that took place up to the coming of the Normans and the historical reasons for the conflicting claims that prohibited unity before and after that event.