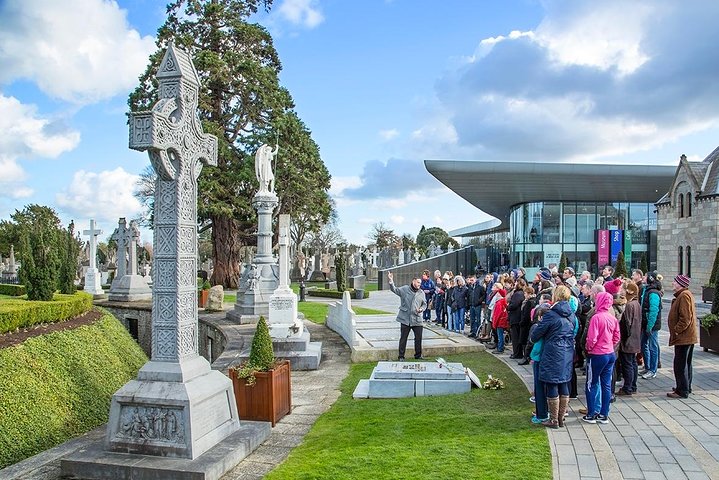 The cemeteries of Dublin – why should they be a place to visit? Basically, they (a) reflect the culture and attitudes of Dubliners and (b) because they also provide an oasis of tranquillity in which to muse and reflect. While some people have a mortal fear of cemeteries, others confess to a morbid fascination with them. Either way, they are part of the cultural heritage and history.

And most cemeteries provide a place to walk and reflect upon life, death and everything else. Just the right antidote to a hectic schedule, be it for locals or visitors.

Dublin has dozens of cemeteries – but only some are worth a visit. Here are some that stand out from the usual … in alphabetical order.

Dead heroes of the rebellion – in a mass grave – define this small cemetery.

This was a military cemetery before Irish independence, with access tightly monitored and controlled by Crown forces. For precisely this reason, the executed leaders of the Easter Rising were buried here in 1916 – in a simple pit covered with quicklime.

Today the cemetery has been partly converted into a park, and a massive memorial has been erected near the communal grave of the 14 rebels. Overlooked by the modern guard tower of Arbour Hill Prison.​​

The important graves belong to the fourteen leaders of the Easter Rising, including Patrick Pearse and James Connolly. Other gravestones have been literally sidelined.

Dublin’s smallest graveyard is a resting place for notable academics.

Size isn’t everything – Chaloner’s Corner, Dublin’s smallest cemetery, is tucked away into a corner of Trinity College, hemmed in by buildings and a footpath.

Only a handful of persons found their eternal rest in this busy place (but more are interred under the chapel or in a nearby college cemetery). Worth a look for its curiosity value when you visit Trinity College.

The most notable grave is Dr Luke Chaloner’s; he was the first provost of Trinity College (and gave his name to the cemetery in a corner).

Nobody knows how many people are buried here or how they died in battle, facing the executioner or slaughtered in revenge killings.

This cemetery is for those interested in history only – there is not a lot to see, in all fairness. The large open area between the National Museum of Ireland in Collins Barracks and the Liffey was used as a mass grave after the 1798 rebellion. Scores of “croppies” (a nickname for the Irish rebels) were dumped and buried here, the number varying from source to source.

Traditionally it is believed that Matthew Wolfe Tone (brother to the rebellion leader Theobald) and Bartholomew Teeling are among the “cartloads” of (suspected) rebels buried here.

Glasnevin, officially the “Mount Prospect Cemetery,” is Dublin’s and Ireland’s largest cemetery – it was also the first cemetery to allow burials to any (or no) rite, thus solving a pressing problem for 19th century Catholics. Its sheer size and numerous graves will keep visitors occupied for hours.

Glasnevin Cemetery in a Nutshell

This sprawling graveyard west of the city centre is a hidden gem and deservedly part of Dublin’s most interesting lesser-known sights, not only because more Dubliners are buried here than are currently living in the city. Some of those who found their final resting place in Glasnevin are amongst the most important historical figures of Ireland – “The Liberator” Daniel O’Connell (who incidentally founded the cemetery), Parnell, de Valera and Michael Collins.

The graveyard was established in 1832 on nine acres – today, around 1,200,000 burial sites cover roughly 120 acres (and it still is growing). Glasnevin was the first cemetery specifically planned to allow funeral rites other than those of the Church of Ireland. Its central point (so to say, it is not really the centre) is a massive but fake, round tower commemorating Daniel O’Connell. The tower is nearly 170 feet high and stands on a vault (open for tours only).

Due to its high number of national(istic) icons interred here, Glasnevin Cemetery is often regarded as Ireland’s “National Cemetery.”

The relatively new Glasnevin Museum gives insights into the history of the place and the history of burials in general. Guided tours are also available.

The sheer size of Glasnevin and the vast number of graves, plus often unclear markings, make navigation complicated. Take a tour if you are pressed for time. Also, the remote parts can be dusty or muddy in hot (or wet) weather. Some memorials are well past their sell-by-date and threaten to topple at the slightest breeze. Fortunately, large sections of the most historic areas have undergone significant renovation in recent years.

Glasnevin Cemetery Highlights for the Visitor

While visiting graveyards may be seen as a very morbid way to spend a vacation, Glasnevin is a special place – not only was the foundation of this non-Anglican cemetery an essential part of the fight for Catholic Emancipation, “The Liberator” himself is even buried here. A massive (though fake) round tower marks Daniel O’Connell’s grave. Nearby a simple (but huge) boulder highlights Charles Stewart Parnell’s last resting place. Originally this was a mass grave for paupers … the poor are all but forgotten today.

Other important “residents” are:

But a general walk around Glasnevin will have you discovering other treasures – like the modern headstones adorned with the emblems of English soccer clubs. Or the eerie rows of graves for stillborn children or those dying shortly after birth (with mounds of toys and wind chimes).

And also, have a look at the high walls surrounding Glasnevin Cemetery. These are not for show; they were built to deter body snatchers (also called “resurrectionists”). With armed guards being stationed in the pseudo-medieval watchtowers.

The Huguenot Cemetery in Merrion Row: An Island of Tranquility

This is Dublin’s most colourful cemetery—when the bluebells come out in bloom.

Often missed by the huddled masses walking between Merrion Square and Saint Stephen’s Green, this small cemetery commands attention mainly in spring – when it is covered in an abundance of bluebells! In 1693 this area was designated the “French Burial Ground” for Dublin’s small community of Huguenot refugees. It closed in 1901 but is relatively well preserved.

The most notable grave is the Du Bedat family plot – which might have inspired James Joyce to a passage in “Ulysses” (though there are Du Bedat tombs in Mount Jerome as well).

Though some tombs are tumbling, this Victorian cemetery is among the best in the world, and like Glasnevin, this, too, is a cemetery for all religious denominations. But although Mount Jerome was founded in 1836, the first Catholic burials only took place in the 1920s – when gravediggers at Glasnevin went on strike. Today the cemetery is owned by the funeral parlour Massey, all 47 acres of it, with maybe the finest collection of Victorian funerary monuments in Ireland.

Comparisons to Paris’ Père-Lachaise and London’s Highgate have been drawn.

Mount Jerome in a Nutshell

If you like cemeteries, you will love Mount Jerome Cemetery, often called Harold’s Cross Cemetery – here, wealthy Victorians set monuments to themselves, built to last. They couldn’t take their wealth with them. So they made sure they could still flaunt it for decades and centuries. Not consistently too successful … some monuments are in a state of gentle decay, and others (especially those made of sandstone) are rotting away at an alarming rate. But this only adds to the attractiveness of Mount Jerome (see the image gallery for proof). Definitely recommended for anybody in search of Victorian Dublin.

The “General Cemetery Company of Dublin” purchased the land in 1834, opening a non-denominational cemetery in 1836. Catholic burials were, however, not conducted here – the faithful flocked to Glasnevin instead. The imposing Gothic funeral chapel was designed by William Atkins in 1847. And in 1984, the entire cemetery was bought by the Dublin undertaker Massey. Mount Jerome also has the first Muslim graveyard in Ireland, near the entrance, to the right.

What to Expect at Mount Jerome Cemetery

In all fairness, right from the start, the cemetery’s picturesque (and inevitable) decay requires extra care from the visitor. I would not recommend leaning against any monuments; judging from some spectacular collapses, you might raise some dust by doing so. And watch your step – monuments, enclosures, and sinkholes conspire to provide a twisted ankle as a lasting memento of your visit.

Apart from this, the cemetery is safe; there are no dark corners to avoid. Only make sure to mind the time. The cemetery gates are closed and locked at 4 pm sharp. Escaping over the walls looks next to impossible.

So why should you visit? Mount Jerome is favourably compared to Pere-Lachaise in Paris and Highgate in London (obviously minus both Jim Morrison and Karl Marx) as one of Europe’s most splendid 19th-century cemeteries. Some prominent persons are interred, but the funerary architecture and sculpture are the main attractions. Conservative family vaults, some serviced by sunken roads, compete with Egyptian-style tombs. And amongst dozens of angels clutching all sorts of paraphernalia, you will find a dog pining for its dead master. A dog carved from stone, but you might encounter the odd live fox loping leisurely through the rows of gravestones.

Important graves to seek out include those of

But there are more modern graves, some blandly uninteresting, others quite intriguing. It pays off to wander about and wonder what happened to this person; sometimes, a newspaper archives scan will help elicit a story. And several unmarked graves, the last resting place of the children of “fallen women” from (by now infamous) church-run homes, might have interesting (if haunting) stories to tell, too.

The disadvantage: Mount Jerome is off the beaten track and not on the main tourist route. But it is easy to get to Dublin’s city centre by bus. And a café on the cemetery grounds even provides some refreshments.

If you like spooky, try for an overcast (but dry) day for your Mount Jerome visit.

A graveyard with many identified burials – yet the unknown dead command the most attention.

The “Stranger’s Bank” at old Saint Mary’s Abbey was used for unidentified victims of disasters at sea. But when the Dollymount to Howth tram line was built in the last years of the 19th century, an unknown “ganger” (presumed to be English) died during work and was also buried here. Colleagues set up two tram rails to memorialise him here – one of the strangest grave markers in Dublin.

Another notable grave is the carved tomb of Christopher St. Lawrence and Anna Plunkett (c. 1470).

The graveyard, though historical, is just a sideshow to the eerie vaults.

What lies beneath is why most visitors come to Saint Michan’s – namely, the vaults and several well-preserved, mummified bodies. Here you cannot only visit the dead. You may even shake hands with them. While the churchyard is undoubtedly worth a visit (despite being architecturally bullied by new developments), the vaults underneath the old church are the main attraction. And the tour is worth every cent.