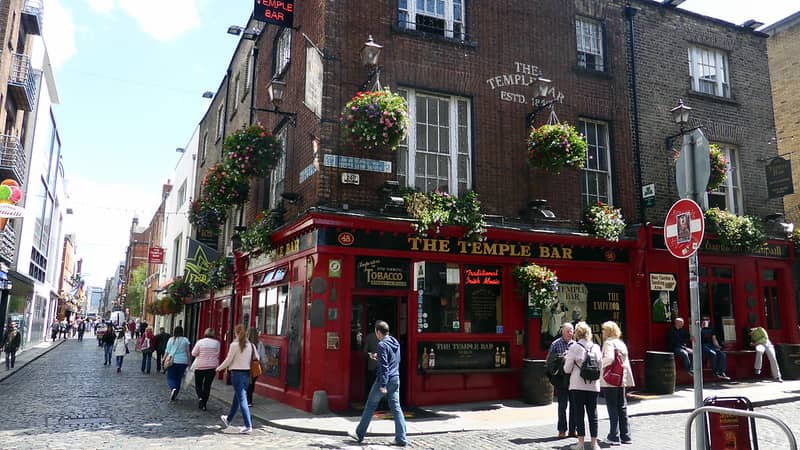 Dublin has a vast array of attractions and things to see for such a relatively small city. The city is over a thousand years old, and there is something to marvel at on almost every street. The unfortunate truth is that a day is simply not enough time to see everything in Dublin but if you’re willing to start the day early and stick to a tight schedule you will be able to make the most of your day in Ireland’s capital.

Have a morning walk around stunning Stephen’s Green

Nothing can start the day as well as an early walk through Ireland’s best-known Victorian public park and Europe’s biggest square, Stephen’s Green. One of the most popular sights to see in Dublin, there are not much better ways to start the day than a stroll through the park with its elegant landscapes and large lake.

Get a Full Irish Breakfast at the iconic Bewley’s café

As you walk down Dublin’s main shopping street, take a chance to stop by and enjoy breakfast and a coffee in the flagship Bewley’s Cafe, built in the 1840s and a tourist attraction in itself, where you can get to taste the very best of a full Irish breakfast and some of the best tea and coffee in the city.

Trinity College is internationally known as Ireland’s leading college and a must-see for any visitors to Dublin. The grounds are fully open to the public, with regular guided tours with no need for prior booking. The 35-minute tour will take visitors through the active college showing the four historic squares of the university and providing an insight into the historical routes and the buildings. The tour also gives an exhibition on the Old Library as well as to one of Ireland’s most treasured possessions and must-see attractions, namely the 9th century ‘Book of Kells’, which has been entrusted to the university.

Grab a pint at the Guinness Storehouse

Located in the heart of Ireland, St James’s Gate Brewery, Guinness Storehouse is Ireland’s number one tourist attraction. Housed in an old fermentation plant constructed in 1902 and recently restored, now the seven-storey visitor experience tells the story of this world-famous drink. No trip to Dublin would be complete without learning about the 250-year-old history of the world-famous drink in a tour that ends with a breathtaking 360 view of Dublin atop the Gravity Bar with a free pint of the black stuff.

Have a picnic in Phoenix Park before heading to Dublin Zoo

After a busy morning, one of the most pleasant things you can do in Dublin is enjoy a picnic in Phoenix Park, the largest urban park in Europe. On a sunny day, the park is the epitome or relaxation and recreation. Covering over 700 hectares, you could spend hours exploring the park before heading to Dublin Zoo. Located in the Phoenix Park in the heart of Dublin city, Dublin Zoo is Ireland’s most popular family attraction and welcomed over one million visitors last year. As one of the world’s oldest yet most popular zoos, the 28-hectare park in the heart of Dublin is home to some 400 animals in a natural environment where education and conservation are rolled into one. Dublin Zoo offers people the chance to learn and see the animals of the arctic tundra and African plains all in one afternoon!

After so much walking, slow down by taking a short and engaging tour of the Old Jameson Distillery as you drink in the history, the atmosphere and the odd sip of whiskey.

The tour experience occupies a section of the old distillery, which kept Dublin flowing with the ‘water of life from 1780 to 1971 until the remaining distillers moved to a new modern distillery in Midelton Co. Cork. This attraction offers a personal touch through guided tours and whiskey masterclasses, which run every 35 minutes.

At the end of the tour, all visitors are rewarded with a complimentary dram of whiskey at the Jameson Bar and partake in a comparison whiskey-tasting session where you will learn how to tell the differences between Scotch, Irish, and American whiskey. An excellent way to finish an eventful afternoon.

Grab a bite and a boogie at Temple Bar

To make the most of a day in Dublin, you have to be on a tight schedule, but that doesn’t mean you don’t have to rush everything; a night in Dublin runs a lot slower than a day. Dublin is a city full of life, culture, and great food. The city centre has something for everyone, but we recommend Temple Bar if you want to be truly spoiled for choice. At Temple Bar, you will find whatever you are in the mood for, whether Irish, Italian, French, Thai or American. It is more than just restaurants, though. After enjoying a mouth-watering meal, you can head out and hit the bars, as Temple Bar is the centre of Dublin nightlife and is busy every night of the week.

Have the craic at Copper Faced Jacks

Finish an eventful time in Dublin by heading to Ireland’s favourite nightclub, Coppers! Located on Harcourt Street, Coppers is arguably Ireland’s most famous nightclub. With usual late finishes, Copper’s acts as a universal meeting point on nights out, attracting Dublin’s revellers from far and wide. Many a night has and should end up in Coppers.