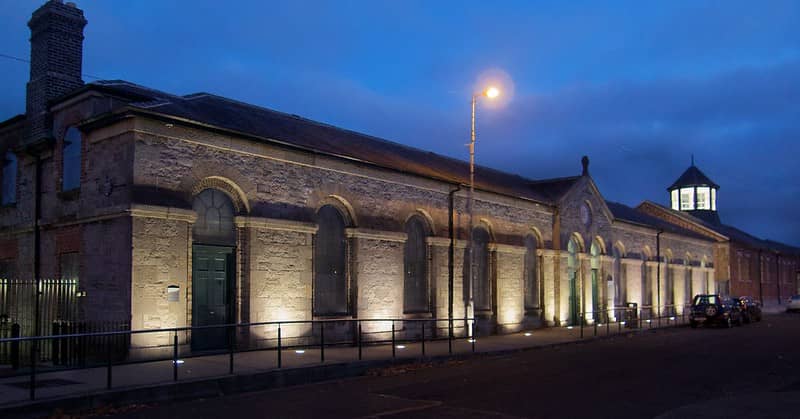 The fallout of the Easter Rising didn’t all happen at Kilmainham Gaol. In the nearby neighbourhood of Inchicore, over 3,000 rebels—men and women—were held at Richmond Barracks, a British military base being used at the time as a training centre for Irish-born soldiers shipping off to fight in World War I.

In the crowded barracks, the Rising leaders—including the 14 later executed at Kilmainham—were separated from rank-and-file rebels, court-martialed, and sentenced on the spot.

Then, from Richmond Barracks, they were marched through the streets to Kilmainham Gaol, where crowds of angry locals jeered and spit at them—the Rising wasn’t initially popular, as more civilians were killed in the fighting than Irish rebels and British soldiers combined.

The barracks sat long unused and crumbling until community interest and funding came through during the 1916 Centenary celebrations.

In May 2016, it opened to the public as a museum remembering its days as a British base of operations, an impromptu processing centre for the men and women of the Rising, its handover from the British to the Irish armies after independence, and its final chapter as government tenement housing and a Christian Brothers school.

The tour will include the 1916 exhibit in the gymnasium, where those arrested after the Rising were processed and sentenced; a re-creation of one of the classrooms from its time as a school (with a fine collection of original furniture found in storerooms and donated by families); and an example of the living quarters for the soldiers—and later, the families—who called the barracks home.

Those who go for the guided tour (recommended) rather than the self-guided tour will take a guided walk through Goldenbridge Cemetery nearby.

This is one of Dublin’s oldest accessible-to-all cemeteries; built independently of a church (non denominational), it was a practical solution to the sticky issue of burying Catholics in Protestant-controlled Ireland. Thanks to an extensive renovation alongside Richmond Barracks, many vandalized and weatherworn markers have been restored.

If time and budget allow, a tour of Richmond Barracks would pair well with a visit to Kilmainham Gaol; you could follow in the footsteps of the executed Rising leaders from the Barracks to the old Garrison Church—still a functioning Catholic church—to Kilmainham Gaol and then across the river to their burial site in Arbour Hill Cemetery. Look for more developments in future updates of this book and on their website (Guided tour €8.00 adult; opening June 2021; www.richmondbarracks.ie.).