When getting ready for St. Patrick’s Day in Chicago, workers must obtain the 40 pounds of coloured vegetable dye they use to turn the Chicago River green for the day. 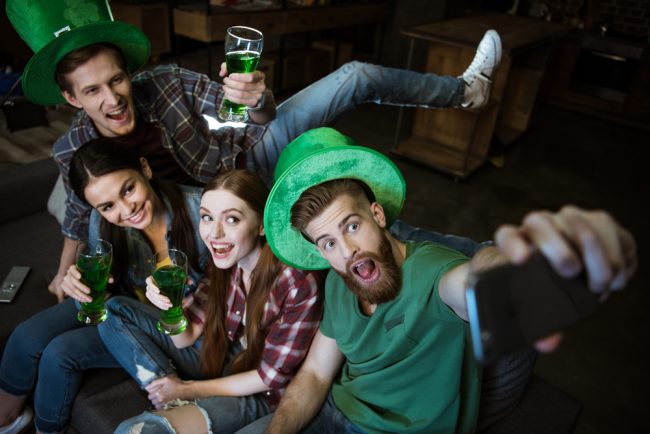 Bars worldwide stock up with more than ten million pints of Guinness stout. And every Mcdonald’s outlet must receive a special shipment of Shamrock Shake syrup so it can serve the icky-green mint-flavoured drink that – why mint, we don’t know – had become such a beloved tradition that there were nationwide protests when the company temporarily stopped selling the shakes.

Preparing for St. Patrick’s Day isn’t quite that demanding a task for most of us. But if you plan on celebrating the day in true Irish style, there are five must-have items you should have on hand – and none of them is as difficult to find as vats of green dye or barrels of green milkshake syrup.

Who Was St. Patrick, and Why Was He Such a Big Deal?

March 17, the date on which the patron saint of Ireland passed away (in the year 461 AD), has been celebrated for nearly 400 years as a Christian feast day to mark the proliferation of Christianity in Ireland. Only that nation and the small island country of Montserrat (founded by Irish refugees) celebrate Saint Patrick’s Day as a public holiday.

You probably wouldn’t realise that fact when considering the number of parades and parties staged throughout the English-speaking world by Irish immigrants, their descendants, and those who feel “Irish at heart.” St. Patrick’s Day is marked by celebrations, of one sort or another, in more nations than any other “national” holiday.

Saint Patrick himself is somewhat of an enigma because most of his backstory comes from his writing and has been greatly exaggerated over the centuries – for example, Patrick never drove the snakes from Ireland because there are no snakes in Ireland.

However, we know that he was born into an affluent British family but was taken prisoner by Irish raiders and held in Ireland for six years before escaping. During his imprisonment, he turned to Christianity, and after returning to Britain, he studied to become a priest. He then returned to Ireland to serve the small number of Christians living there and convert non-believers, most of whom were considered pagans by the church.

Patrick was successful in his mission and became beloved in Ireland mainly because he blended traditional Irish Celtic symbols and rituals with more rigorous Christian teachings; the best-known product of this approach is the shamrock, a sacred Celtic symbol Patrick used to symbolise the Holy Trinity. He is said to have converted well over 100,000 people and established hundreds of churches over his 40 years of missionary work.

While never actually canonised as a saint, Patrick is recognised as Ireland’s “Patron Saint”. His work makes it easy to understand why he is held in such high regard in that country and has been recognised as a national feast day for over 1,000 years. What’s not generally known is that the day was much more of a religious than secular holiday in Ireland until recent years, when the Irish government began sponsoring a huge multi-day St. Patrick’s Festival to build interest in the nation’s culture and boost tourism. (Believe it or not, pubs in Ireland were legally required to be closed on St. Patrick’s Day until the 1970s!)

In pre-revolutionary America, some Irish soldiers served in the British army. In 1762, they decided to march through New York City to celebrate their heritage; that was the first-ever St. Patrick’s Day parade. Over the years, the size of the parade grew as more immigrants of Irish descent came to America.

It wasn’t until 1848 that the New York parade became official, with the city’s various Irish Aid organisations joining forces to stage a massive celebration. This coincided with the Great Potato Famine in Ireland, which led nearly a million Irish Catholics to emigrate to the United States. Most faced discrimination and poverty, and St. Patrick’s Day became a unifying symbol of their heritage.

As Irish-American political power grew, the parade and related celebrations became important events for municipal and political figures to attend, crowds snowballed, and Irish communities in other U.S. cities – and eventually, around the English-speaking world – developed their own St. Patrick’s Day celebrations, parades, Irish music concerts and special events. They range from the annual dying of the Chicago River to Boston’s famed St. Patrick’s Day Breakfast, an Irish-themed get-together and good-natured political roast now carried on national television. 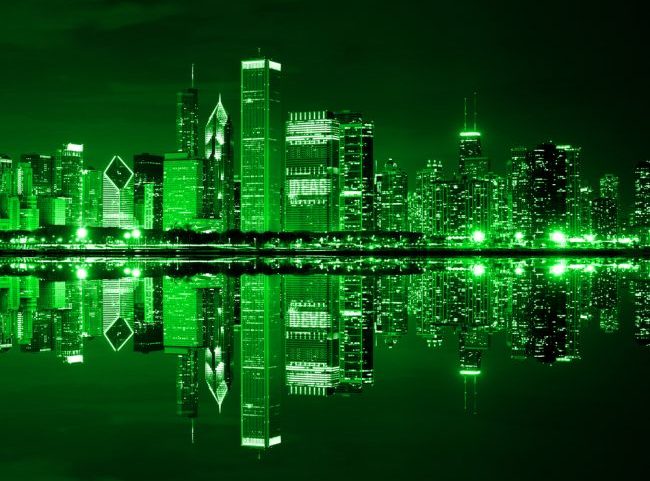 There’s another primary ingredient we haven’t mentioned: food and drink. St. Patrick’s Day falls during the Catholic period of Lent, when many people abstain from eating certain foods or drinking alcohol. Since the Catholic Church observes Saint Patrick’s Day, however, all restrictions are lifted for the day. That has encouraged many to indulge (or over-indulge) in their favourite beverages and meals while marking the day. Traditional Irish fare like corned beef and cabbage, Irish stew, and lots of beer (particularly Guinness) and whiskey are de rigueur at St. Patrick’s Day celebrations.

March 17 is an important day for those of Irish descent to honour and celebrate their heritage. But with huge parades and parties, great food, lots of drinking, and loud and festive music, the question isn’t why St. Patrick’s Day is celebrated worldwide.

The real question is why someone wouldn’t want to celebrate. Here’s what you’ll need to do in style – the Top 5 Must-Have Items for Saint Patrick’s Day.

Guinness Green Collection Pint Glasses. Click on the photo to see the Price on Amazon.

The producers of legendary Irish Guinness Stout say that St. Patrick’s Day celebrants spend an average of $35 on March 17th partying, with most of that amount spent on beer – with a massive percentage of them enjoying the company’s famed dry stout. The brewery says that 13 million pints of Guinness are consumed every Saint Patrick’s Day.

All authentic Irish pubs, and most other great watering holes, have Guinness stout on tap; if you’re going to be partying at home, it’s easy to find it in cans or bottles. However, the experience of downing a few pints isn’t complete unless Guinness is served with a “two-part” pour in a suitable glass, and these authentic Guinness green pint glasses are designed to fill that role.

Many who go all-out on Saint Patrick’s Day are primarily concerned with tradition and authenticity. Many others are just interested in having fun – and those who are naturally outgoing (or whose inhibitions are lessened after a few pints) consider the “wearing of the green” a vital element of the celebration. There are thousands of “Kiss Me, I’m Irish” t-shirts available everywhere you look on St. Patrick’s Day, but those just make you one of the crowd.

If you want to stand out at a parade or the pub, you need an eye-popping costume. And the one that’s caught the review team’s fancy is the green Mr Leprechaun costume from Forum. It’s made of polyester and can be a tight fit for more significant adults, but it perfectly captures the whimsical yet festive nature of the holiday.

This one-piece costume is built around a green jacket with black cuffs and collar, an attached green vest with a shamrock design, a white shirt and a green bow tie. There are also stretchy green shorts and a floppy leprechaun hat; simply add a few accessories like a fake beard, pipe and pot of gold, and you’ll be the dapper celebrant. Forum offers a similar costume in child’s size.

Ladies, you didn’t think the team would forget you, did you? Here’s the perfect outfit for your Saint Patrick’s Day party or outing, whether you are going with Mr Leprechaun or hoping to find a like-minded Irish mate. The Leprechaun Lass costume is a four-piece outfit in green, black, gold and white, with a shamrock-print green dress, peasant top, attached underskirt and black hat with a green band and gold buckle.

This outfit is cute and sexy, and while it’s a one-size costume, it will fit most women well. Add white or green tights, your choice of matching footwear, and you’ll be the star of your St. Patrick’s Day celebration.

Guinness Rugby Ball. Click on the photo to see the Price on Amazon.

Saint Patrick’s Day has unquestionably taken on a life of its own, with many celebrants paying lip service to the day’s meaning and focusing much more on an excuse to drink and party.

If you’d like to put the “Irish” back into your St. Patrick’s Day gathering, why not follow up a corned beef dinner by inviting your guests outdoors for a traditional game of rugby? (Gaelic football and hurling – the game, not what often follows heavy drinking – are the national sports of Ireland, but rugby is a lot easier to understand and play).

This black, gold and white Guinness rugby ball is an official replica ball from the Pro12 Rugby Competition (formerly known as the Celtic League); it’s durable and the proper size for a proper game of rugby on your front lawn or a nearby field. Not sure how to play? Pick up a copy of Rugby For Dummies ahead of time to familiarise yourself with the rules.

Whether you plan on partying at home, going out to see a parade or pub-hopping, you’ll need sustenance. And there’s nothing more traditional than corned beef and cabbage on Saint Patrick’s Day.

Finding high-quality, lean corned beef can be challenging unless you live in a major city with a high-end deli, so a great solution is ordering it from America’s oldest specialist in producing high-quality corned beef. E.W. Grobbel’s has been bringing, corning and selling this delicious meat since the company’s founder came to Detroit in the late 1800s, using a proprietary recipe to create corned beef with incredible texture and flavour.

They’ll deliver three pounds of fresh, lean sliced corned beef to you in quick order; all you have to do is pick up a head of cabbage (or, if you’re not going completely traditional, some sauerkraut and Russian dressing to make Reubens), boil some potatoes if you’d like. You’ll have a meal fit for a Saint– or at least someone celebrating his life. (Surprisingly, the Irish aren’t as partial to corned beef as those of Irish descent living in America and elsewhere – but that doesn’t make it any less delicious).