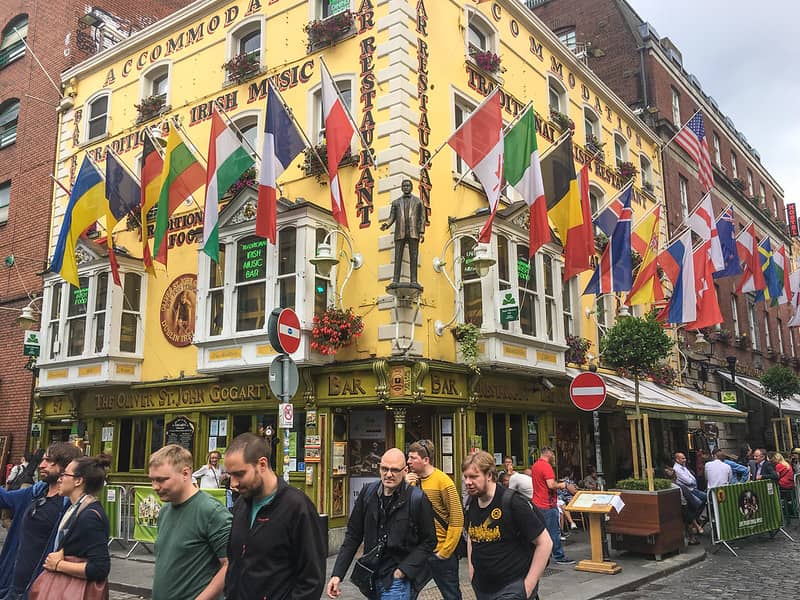 Dublin’s Cultural and Creative corner, Temple Bar is famous for its eclectic mix of lively nightlife, clubs, bars, galleries and concert venues, the area has become a hugely popular attraction full of things to do in Dublin for tourists and locals alike. The city centre location just off Dame Street running parallel with the South Quays is the home to a number of Irish cultural institutions, including the Irish Film Institute, the Project Arts Centre, the Gaiety School of Acting as well as the Central Bank of Ireland and Irish Stock Exchange. Some of Dublin’s best bars, restaurants and shops line the cobblestone streets and squares of an area bursting with atmosphere and culture.

The cultural hub as we know it today was largely built up in the 1800s, but by the 1980s had fallen into such misuse and decay that at one point, the state owned transport company, Córas Iompair Éireann (CIE), proposed to buy up the property in the Temple Bar area and build a terminus in its place. While the planning for the proposed terminus was taking place, the buildings were let out on low rents which attracted a number of young artists, small shops and galleries to the area. The locale soon developed an “alternative” identity and a successful lobby by local residents persuaded CIE to drop their plans. The government then proceeded to allocate additional funding towards a new conservation and renewal scheme which has seen Temple Bar’s extraordinary redevelopment as Dublin’s cultural quarter.

One of the oldest parts of Dublin city, the history of Temple Bar extends as far back as the Vikings in Ireland, with the street pattern of the area based on the medieval street plans of the Old City.

The 10th annual Temple Bar Trad Fest will take place from January 28th to February 1st 2015. Since its establishment in 1995, the TradFest showcases a variety of traditional and folk music and this year’s line-up featuring Donovan, Hothouse Flowers and Mick Flannery (among others) promises to be one of the best yet.